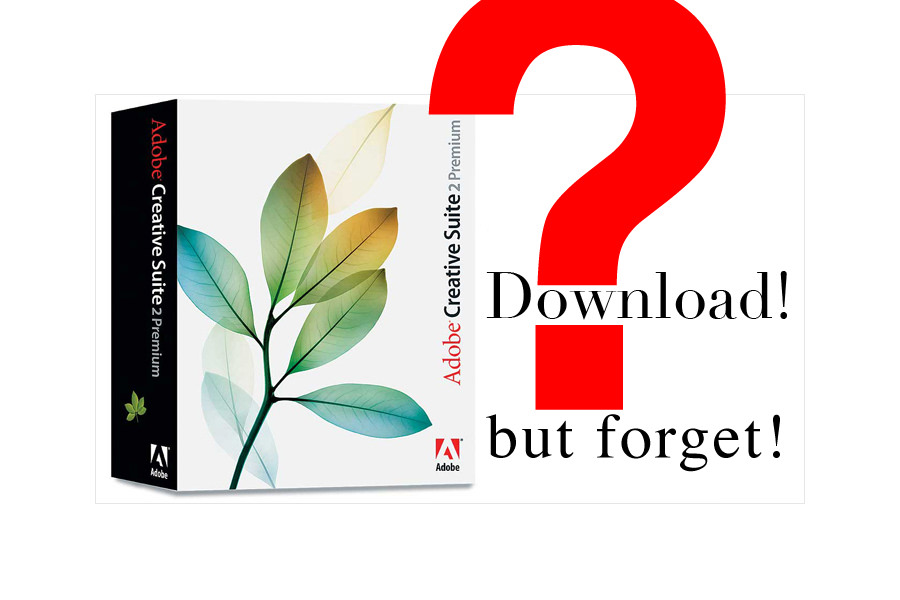 Post scriptum to the previous announcment about Adobe CS2 for free: Seems like someone press a button without thinking about it. Why – What – When?

The simplest move towards people still using this 7-8 years old software (from 2004-2005) partly incompatible with actual line of computers (for example new Apple Mac OS without Rosetta software that allow compatibility down for PowerPC software) is to send them message. “You are registered user of Adobe Photoshop CS2, from December 2012 you won’t be able to activate your software. Please get it touch by below form to be included in our special program for our Customer providing special version of you licenced software that activate by serial number not by internet connection to our servers.”

What Adobe did was out of this planet. Since always we were betatesters for Adobe. Betatesters paying for software to work with but suffering from it’s minors and bigs. All first versions of each generation of Creative Suite and other software were buggy, problematic and so on. Maybe of that, maybe because of Christmas – so many people believed that Adobe did it not by mistake, but just for users. Because you cannot upgrade from Adobe CS2 to actual line of Creative Suite. Because you cannot buy Adobe Creative Suite 2. Because it won’t work on actual line of computers (including new Macs). Because sometimes it happens, companies do it for it’s PR.

What’s really happened? Every registered user of adobe.com had opportunity to access CS2 Downloads, a subpage located in Home / Products/ Adobe Creative Suite family / folder. Adobe provided there archive for download with serial numbers. It was without explanation who can use it and for what area. It was not restricted at all. The programs were in normal commercial version, license does not mention any limits to academic / educational /limited use. So we, users, got access to something that has been given us by mistake?

From the legal point: it was provided for ALL adobe.com users without any mentioning about limits of that. It was provided by adobe.com which is owned by Adobe Inc. More over, the page with the links is down, but there is no official statement from Adobe: it’s illigal, you cannot install and use it. Until that it’s not logical to say: it’s unlegal. We have to wait for two statements: the official one from Adobe and law interpretation.

two quotes from discussion on forum.adobe.com

“When you install the products the licence says that the product can be used by anyone who has “obtained” it from Adobe (they deliberately don’t use the words bought or purchased).  It would be a highly technical breach of the licence if someone put the files up for download other than from the Adobe site because then you wouldn’t be obtaining it from Adobe.”

“I cannot believe any legal authority would consider that there was anything remotely illegal about downloading these files and public serial numbers by people who didn’t pay for licences in the days when they were available for purchase.”

“Probably there are now enough copies of these files in circulation to prevent Adobe from putting the cat back in the bag, but if they wish to restrict their server load, they could now – I assume – change the page only to allow access by any means to those whose Adobe ID identifies them as previous licence holders, which is an option that presumably they had in the first place.  Making the files publically available on their servers, but then expecting “unauthorised” people not to download them, was somewhat naive, especically when the files were accompanied by a licence agreement which did not make the downloading and use of the files illegal.  To regularise the legal situation, the licence needs to change the word “obtain” to “purchase”.  But for those who have already downloaded the files, you can’t retrospecitively change the licence.”

“In fact, no one from Adobe team told us that it can’t be used for commercial work.”

“Jeff A Wright,  That is NOT what you stated yesterday.  You have edited your response.  Yesterday you stated:

“Yea CaptainSmingey we are aware that the software is available for all users with an Adobe ID.  Please keep in mind that due to the age of these software titles it is likely that they will not function properly on modern operating systems.”

“if the police will check the software on their license and will find this program whether it is enough to register on your site get adobe id and the presence of the activation numbers obtained from your site even if I do not buy photoshop before.

what legal basis of this program, which I have, I downloaded Registered.”

it’s hard not to agree with that quoted above. It may be different in legal/law interpretation from country to country but generally… something (access to files and serial numbers) has been given and saying that it’s not legal to keep it and use it because someone (not we) made bad decission aka mistake… it’s not big deal in term of loss or money income: you cannot but it, the software is abandoned, not supported even to activate by original Adobe servers. So where is the point to not to make it free for adobe.com users?

Adobe published on it’s Twitter account “Failure is the opportunity to begin again more intelligently” (9:31 PM – 7 Jan 13). Definately. What you are going to do, Adobe?